No leader could have achieved what Modi has

'If one is looking for evidence of his talents as a mass leader, it has been on display since he announced demonetisation on November 8.'
'Let us look at it and appreciate it, because we are in the presence of a true master,' says Aakar Patel. 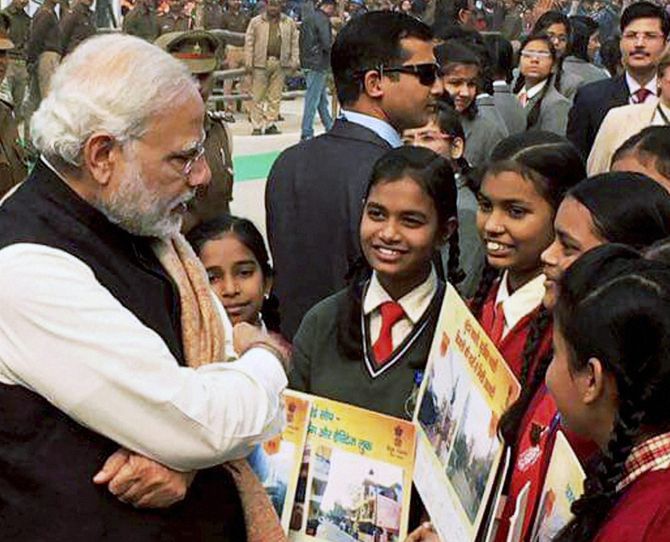 No leader in India and perhaps no other political figure in any modern democracy could have survived the demonetisation crisis for seven weeks as Narendra Modi has.

If one is looking for evidence of his talents as a mass leader, it has been on display in this entire period.

Let us look at it and appreciate it, because we are in the presence of a true master.

We have a few clues that the currency exchange crisis may not have been fully anticipated by the government. The first clue is Modi's initial announcement where he made some predictions on a return to normalcy that were incorrect.

The second is that he continued on a scheduled visit to Japan, at the time when the extent to which the note shortage would affect the economy was just being realised.

By the time he returned from Japan it was clear that the queues were not going to disappear quickly.

His initial announcement was so powerful and energetic that it carried popular opinion. The media was fully on his side and a nervous Congress lacking in confidence also announced support for the move.

Only two grassroots leaders, Mamata Banerjee and Arvind Kejriwal, recognised the danger and opposed it.

Modi was in fact able to recruit large parts of the population on his side, probably including millions who did not vote for him, but who did not mind the inconvenience because they anticipated major change.

It is difficult to imagine the Manmohan Singh government producing this kind of euphoria in either the media or the middle class urban population if it had chosen to demonetise.

The reaction would likely have been the opposite: Resentment at being made to go through the trouble. And if it had carried on for seven weeks there would have been extreme anger.

Perhaps that anger is building now when it is clear that the disturbance is going to stay for months, but for Modi to have sustained it even for this length of time is remarkable.

The second demonstration of his talent was how quickly he grasped that the negative consequence of the policy was bigger than anticipated.

Immediately on his return from Japan he made a couple of speeches in which he did two things. First, he said to Indians that he meant well and that he had sacrificed his family life for his mission.

The uncharacteristically emotional moment of that speech, when he briefly broke down, may also have been the moment when he acknowledged to himself that the issue was out of hand.

Second, he said that normalcy would not return before 50 days. With this second move, he bought himself time and space to recalibrate his strategy.

Once again, he got the media on his side and the discourse over the immediate problems that people were facing was diverted.

Now Modi could have waited for things to settle on their own, but he chose instead to voluntarily offer a timeframe before being pressed on it by the Opposition.

It is this comment on 50 days of inconvenience that allowed him the freedom to think of how to reposition demonetisation. As some publications have noted, there was no reference to a digital economy in his initial announcement, which was limited to black money, counterfeit currency amd terrorism.

It is after his return from Japan and those speeches that suddenly the discourse shifted and it shifted because of Modi's talent and credibility.

One can picture him thinking about it alone. The Opposition said this was a shifting of goalposts, but they should understand that this is not a university debate.

So long as Modi can convince large parts of the population that the policy is good and the inconvenience will ultimately be beneficial, he will continue to do so.

The specific benefits of the policy are unimportant to politics.

Proof of this appeared when the Bharatiya Janata Party continued its electoral successes across India even a month after demonetisation, including in Punjab where it is in power and suffering anti-incumbency.

There is actually no opposition to Modi at the moment and he is still in full control of the narrative, which is astonishing because it has affected every single Indian negatively.

The Congress had the opportunity to exploit mass inconvenience, but it has so far been unable to.

Many people are hesitant to publicly voice their dislike of demonetisation because they are afraid that they will be abused.

No other Indian leader, and few politicians in democratic politics anywhere could have achieved what Modi has since November 8.

Perhaps this will change in 2017 when the medium term effects of demonitisation are on display in the second salary cycle after November 8.

For now it must be acknowledged that so far, the prime minister has shown that he is where he is not because of luck, but pure talent at bringing public opinion to his side and keeping it there.

Aakar Patel is Executive Director, Amnesty International India. The views expressed here are his own.

Modi is the inheritor of Vajpayee's legacy 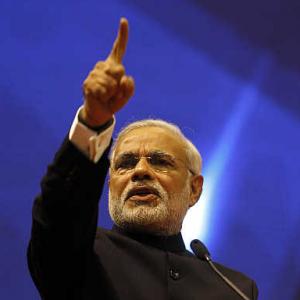 Who will be proved right? NaMo or Manmohan?

Noida admin orders no rent from migrants for a month

Why Indian players are at disadvantage amid lockdown

How cash became a bad word