IMAGE: Villagers work at an MGNREGA project. 'You will not find any forward caste poor there. That is not the kind of work they are looking for,' says P S Krishnan. Photograph: Krishnendu Haldar / Reuters

Though P S Krishnan retired in 1990 after serving governments under many prime ministers in various capacities as an IAS officer, he continues his work for the socially deprived classes in India.

Krishnan has been on numerous government committees after retirement and instrumental in creating many laws to bring social justice to the scheduled castes, scheduled tribes and backward classes.

The Supreme Court on March 11, 2019 said it would hear on March 28 a plea to refer the issue of 10 per cent quota for economically weaker sections for upper castes to a Constitution bench. Krishnan believes the current 10% quota will not stand in a court of law.

"If the case is properly argued, which I think it will be -- people are also taking my guidance -- I don't think the Supreme Court can uphold this Constitutional amendment," he tells Rediff.com's Shobha Warrier.

Some people, including Prime Minister Narendra Damodardas Modi, say by introducing the 10% quota for the economically backward, justice was done to a section of society, finally. Do you see social justice in the law?

In our Constitution, reference to social justice is with regard to classes which is a group of communities in a similar situation because they were prevented from access to education, a place in governance and administration, different institutions and resources.

Such classes are referred to in our Constitution in the context of social justice and social equality.

Article 46, which is very crucial, directs the State to take measures for the advancement of the weaker sections of society, in particular scheduled castes and scheduled tribes, and protect them from social injustice and exploitation.

Is economic backwardness not social injustice?

No, it is not social exploitation or social injustice.

Economic backwardness is a different type of problem which needs to be tackled in a different way.

In our Constitution, Part 16 is titled as Special Provisions for certain classes. And the classes covered are scheduled castes, scheduled tribes and socially and educationally backward classes.

It starts with Article 330 and ends with Article 342. Article 340 talks about the socially, educationally backward classes. Article 341 deals with the listing of scheduled castes. Scheduled tribes have already been identified even before Independence. So, there was clarity.

Article 340 spoke of the appointment of a commission for identifying the problems of the socially, educationally backward classes, and make recommendations.

These are the communities that suffered injustice, and not poor people.

There are different diseases and each disease needs different type of medication.

You mean, reservation is not a medication for economic backwardness?

No, reservation and other related measures were conceived in relation to the problems created by the caste system and untouchability over centuries.

One of the major issues dealt with in the Constitution was the harm done by centuries of the caste system and untouchability, and the harm it will do to the nascent nation in future if the harm was not remedied then.

That was why so many measures were mentioned in so many Articles and they were not provided to eliminate poverty.

Is the economic backwardness experienced by an upper caste person and a person belonging to a scheduled caste or scheduled tribe, different?

No, poverty has different types. There is a difference in the poverty experienced by a person from the upper caste and a person belonging to a scheduled caste or scheduled tribe.

Poverty can be caused by the caste system and by its injunctions, and one of them was that they cannot own land. But there is no such injunction for an upper caste.

Then, people from the untouchable communities were prevented from coming to school.

The upper castes certainly has got some poor people though much less than in the SCs and STs.

Take the case of MGNREGA. Who is working there? Only scheduled castes, backward classes and scheduled tribes and converts from these communities to Christianity and Islam.

You will not find any forward caste poor there. That is not the kind of work they are looking for.

Poverty of an upper caste is because of the misfortunes of individuals and not connected to the entire group or class.

They did not face any impediments that are of societal nature.

Poverty, in their case, is an individual phenomenon and not a class phenomenon. This is the essential difference.

Reservation is designed to help those who face societal blocking as classes and not as individuals.

When reservation was first introduced, even B R Ambedkar wanted it to be reviewed after 10 years. Decades have passed. Don't you think it is time to review the results?

There is a lot of confusion among the educated people about the 10 year limit. The 10 year limit was prescribed only for reservations in the Lok Sabha and state assemblies, and not for employment or education.

So, there is no time limit for education or employment. It will be there till you solve the problem.

What we have to review is the casualness and indifference with which we address this issue. We have never addressed this issue properly.

What have we done to remove untouchability?

What have we done to give quality education to scheduled castes and scheduled tribes?

What have you done to give land to the landless scheduled castes?

It means all the governments that ruled the country in the last seven decades have failed.

They never cared to address the problem holistically, through comprehensive remedial measures, and appropriate and adequate ways to solve the problem.

There has been improvement, but not qualitative.

The National Commission set up by Atal Bihari Vajpyee in 2000 under the chairmanship of retired Chief Justice M N Venkatachaliah has answered this question.

The commission gave its report in 2002 to the then law minister Arun Jaitley. The report says that reservation was not intended to be an ottamooli (cure-all).

You remember the song by Johnny Walker, lakh dukho ki ek dawaa... It is a measure to remedy an imbalance in governance, administration and education caused by untouchability.

It is not a remedy for all the sufferings of the scheduled castes and scheduled tribes.

Yes, change has been there, but not at the root.

Whose fault is it? The political class or the bureaucracy?

It is the fault of the elite of the upper castes who dominate every political party, every institution, every organ of the State, whether it is the executive, judiciary or legislature, universities or banks.

Everybody treated it very casually as if they are doing charity.

When they come to the universities, they are discouraged. I know teachers who ask these students why they want to hold a pen and not a broomstick? It happened not in any village, but in the metropolitan cities.

Many belonging to the general category complain that even with merit, it is tough for them to get admission in good universities because of reservation.

You know the entire manual labour account for 70% to 75% of the population. The remaining 25% to 30% only are in the general category. They talk as if they are the majority.

The majority are the disadvantaged. The scheduled castes, scheduled tribes and backward classes comprise anywhere between two-third or three-fourth of the population and almost 100% of the physical labour force.

Why do you think this 10% quota got acceptance by all political parties, including the Bahujan Samaj Party that represents Dalits?

The real job of all political parties is to remove all inequalities and only after that, you can have sabka saath.

In actuality, they want to get votes and win seats, they want power. In a democracy, all political parties will do that.

And different political parties have different bases. No party can come to power with only its base; it requires 'plus something'.

By supporting the bill, all the political parties are looking at this 'plus'.

But broadly speaking, every party from the Right to the Left, has tried to win over the upper castes, either afresh or retain them, through fair means or foul.

Do you feel this law will be struck down by the Supreme Court?

In my opinion, if the case is properly argued, which I think it will be -- people are also taking my guidance -- I don't think the Supreme Court can uphold this Constitutional amendment.

Because it is contrary to the basic structure of the Constitution.

Article 16(1) that deals with government appointments, which is very important in a country like ours, specifically says the State shall not discriminate against any citizen on the basis of caste, religion, gender, descent, place of birth in the matter of appointment to posts and services under the State.

It means if there are 100 posts, they are available to all citizens equally.

It also added that because of inequality, absolute equality will not be available to those discriminated against.

Therefore, supporting provisions were made in Article 16 (4) that 'notwithstanding this, the State may provide reservation in the appointment of posts and services under the state to any backward class citizens which in the opinion of the State is not adequately represented in the service of the State'.

You have reduced 45.5 from the 100 for Constitutional reasons, but the rest of the 55.5 was for all citizens and not only for forward castes.

But with this bill, you are reducing 10 from the 55.5. By doing this, you have affected the fundamental rights of the people, and you cannot do it.

The Supreme Court had struck down one clause in the order issued by the V P Singh government.

P V Narasimha Rao's government then added a clause that economically poor who are not covered by any of the existing reservation shall be given 10% of reservation.

The Supreme Court struck this down saying that mere poverty, unless it is because of social backwardness or social lowliness, cannot be used as an argument for reservation.

So, you are saying the same argument will be used by the Supreme Court against this law too?

The difference between now and then is now there is a Constitutional amendment.

There is a new clause in Article 16 and two new clauses under Article 15 which broadly parallel the provisions of scheduled castes, scheduled tribes and backward classes.

Whether this will be a protection against the decision of the Supreme Court when such an amendment was not there is the question.

The basic structure of the Constitution provides reservation only for those who are the victims of caste untouchability.

As a person who was part of creating many laws for the scheduled castes and scheduled tribes, how will you look at this bill?

So, what kind of medicine does the economically backward need?

Their backwardness is due to financial incapacity. So, you give financial capacity to them through scholarships, educational loans and skill development so that no child in the country remains backward. 'Quota bill is Modi's desperate attempt to come back to power' 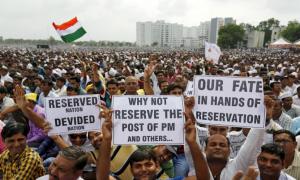 'What's the basis for 10% reservations?' 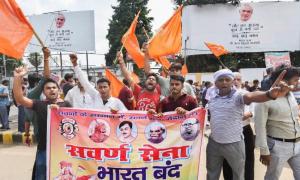 'This move is Modi's political desperation'